The alien Thor as he appeared in the TV-Series Stargate SG-1.

Anyone familiar with the ten-season long sciencefiction series Stargate SG-1 knows that its main characters meet many aliens. A fan-favorite among the returning alien characters is Thor, Supreme Commander of the Asgard Fleet.

This small grayish alien leads a technologically superior race called the Asgard, becoming an ally and even friend to our heroes from earth. As the series progresses, viewers get to meet more Asgardians, including Heimdall, Aegir, and Loki.

These names are not just homages or Easter eggs, the show’s writers actually combined these little grey intellectuals from outer space with our ancient earthly belief in the Norse gods.

But how did they make it work? They did so by turning the whole of humanity into simple space villagers.

In the series, the Asgardians are first introduced to the viewer by a holographic image, depicting a burly Viking naming himself Thor. As the viewer later discovers, this image was not real, but used by the aliens to both protect and keep an eye on certain planets within our galaxy.

This might raise the question: who came first? Did the Asgardians base their identity (or at least how they represented that identity to us humans) on existing Norse Mythology, or is our belief in the Norse gods based on these little aliens and their holograms?

Despite the fact that fans might disagree on this matter (which is only fair), it seems strongly implied that these aliens were the inspiration for what later evolved into the canon of Norse mythology.

It’s fascinating how the writers of Stargate have managed to intertwine their epic tale about futuristic space exploration with earthly Norse mythology. In fact, the Norse gods weren’t the only deities to originate in outer space. The Egyptian gods (and the explanation about how the pyramids were built) also turn out to be extraterrestrial in origin. 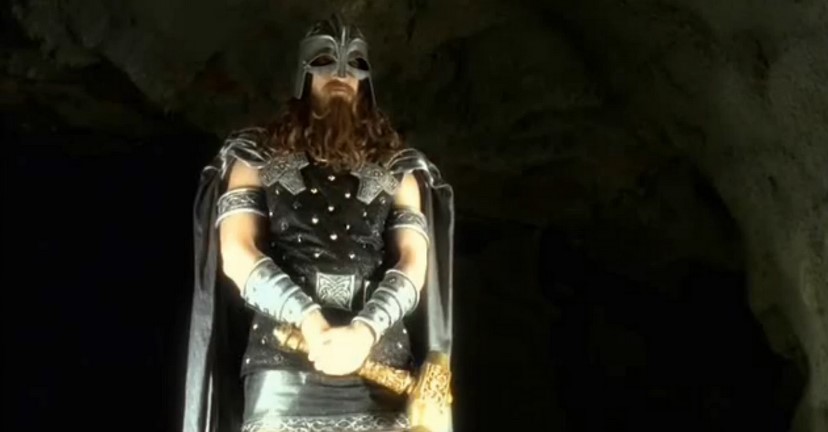 Late to the Party

Why would the writers choose to connect these new and exciting species to our own beliefs and myths, creating a whole lot of problems for themselves along the way?

Firstly, although space exploration might seem futuristic, it is made clear that we humans are actually quite late to the party. “We” only managed to join in because we found an alien device and applied our human stubbornness until we made it work.

In the analogy about how undiscovered tribes in the Amazon might think planes are forms of magic, humanity from the Stargate universe takes the place of the tribe. So, it’s suddenly not that strange that what once might have been viewed as magic or godly, was in fact just advanced technology that humans were not yet prepared for or able to understand.

This does not only give an amazing new perspective on ancient mythology (if you were a character in Stargate, at least) it also was an extremely clever way of the writers to entangle earth with many different planets and races. As a result, Stargate’s human race of new space travelers quickly found a place to fit in.

It seems that by giving earth a primitive status, lots of mythical, magical and unexplained things suddenly could provoke the serious question: ‘Was it aliens?’. Besides providing enough material for ten seasons worth of episodes, it is an interesting way of looking at mythology.

The movie trope where the time traveler impresses or scares the villagers with his “magic box” (read: cellphone) are entertaining enough. The writers of Stargate just made us earthlings the villagers, with mythology as our magic box: a way of explaining impossible things. For the concepts of magic and mythology are, among other things, ways to explain what we could not yet understand.